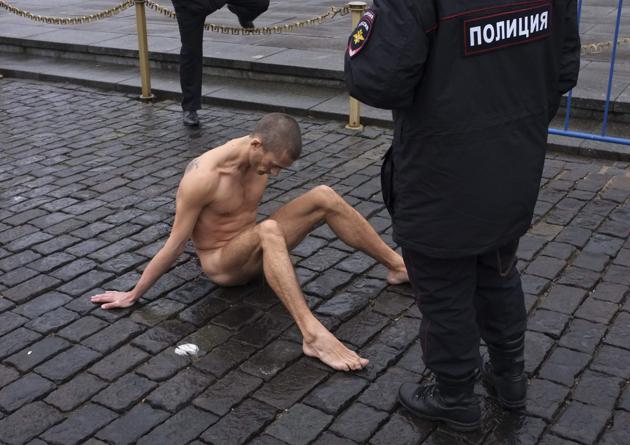 Abstract: In this rhetorical analysis, the 2013 performance piece Fixation by conceptualist artist Petr Pavlensky is considered in light of dramatist and narrative criticism. In addition to advancing a theme regarding governmental power, the piece is shown to reflect Burkean concepts including the representative anecdote, the pentad, and tragic heroism. The impact of Fixation on various types of observers is also considered.

It was more than a century ago that Frédéric Bastiat, the French classical liberal theorist, observed how government power has always come about when “men consider themselves as sentient, but passive … reduced to expecting everything from the law” and because “they admit that their relation to the state is that of a flock of sheep to the shepherd” (Roche 105). There is little doubt that we live in an age of enlarging state power, a situation which has caused many to come to the realization that totalitarianism is truly the teleological end of all government intervention. Societal problems in a world of acquiescent citizens will always bring about new policy measures, as Bastiat further notes, which serve “to enlarge the domain of the law indefinitely … the responsibility of the government” (104). This is the story in which most of us live—one of rulers and subjects—and it is a story which has been articulated by scores of thinkers throughout history. In November of 2013, Russian conceptualist artist Petr Pavlensky retold the story with a performance piece in which he drove a nail through his scrotum and into the street of Red Square. Pavlensky’s Fixation can be understood richly when viewed narratively, particularly through its use of dramatist elements including the representative anecdote, its consistency with the pentad framework developed by Kenneth Burke, and its unique expression of the tragic hero concept. These elements resonate with the same overarching theme of citizens faced with an ever-expanding state power.

It is typical that some texts may not look like they contain “narratives of stories on the surface,” as Brummett describes, but can still be dealt with critically “as if they were narratives” (109). This is quite characteristic of Pavlensky’s Fixation. One element present in his piece is the representative anecdote, a feature in narratives which David Blakesley calls “a slice-of-life story that captures an interesting moment but that also can generate questions about a broader subject” (4). The larger subject which Pavlensky seeks to bring up in the first place is the existence of an oppressive police state in Russia. The function of the artist himself, who nails the skin of his genitals to a cobblestone street, is as a symbol of vulnerability. He had a very specific reason for choosing the location of Red Square as the scene of the performance. It is one vitally important place, the artist explains, “where admiring of the authority takes place” (Galperina). In addition to this, the performance act itself occurred on Police Day, which involved a very public celebration held by the Russian Interior Ministry in recognition of police officers (Associated Press). In an interview with the online publication Animal, Pavlensky decries every kind of “collectivist sentiment,” especially nationalism and fascism, and this would certainly include a government-backed police force. “I strive towards an Anarchist ideal,” he says, arguing that such a situation would be “a total departure from the totalitarian point toward [which] every government heads” (Galperina). He views the current Russian regime as being cut from the same cloth as the former Russian secret police, “the structure from which he [President Vladimir Putin] came” (Galperina). In light of this exigent circumstance, we can understand how one purpose of Pavlensky’s representative anecdote is to convey the reality of the situation in which the protagonist—the nailed-down man—has found himself. His position is one of total disempowerment. He is completely naked, with nothing to signify him as an individual distinct from others. Symbolically speaking, he has been pinned down and rendered wholly ineffective, a potential object of ridicule and a figure to be easily discredited by respected state authorities and the general public.

Yet there is another aspect of the representative anecdote that is worthy of attention, especially if we consider Pavlensky’s openness about his directing of the performance toward those who are politically apathetic (Walker). In his Elements of Dramatism text, Blakesley observes that there is a curious “tonal pun in [the word] anecdote, which sounds like the word antidote … Like an antidote, they [representative anecdotes] may work as poison or cure” (97). The message that Pavlensky is seeking to communicate is clearly an antidotal one. His simple action in the process of nailing himself to the street can largely be understood as a call to recognize the truth behind the characters in his narrative. The audience is meant to distill from Pavlensky’s actions an anecdote regarding the Russian people, that they themselves are nonresistant and are thereby willing participants in their own self-inflicted pain. In an odd twist, it is not a government that has caused this situation. Instead, it is the governed, the same people who Pavlensky says “corroborate the authority’s agenda” (Galperina).

Another manner in which Fixation can be understood narratively is by considering its fidelity to Kenneth Burke’s pentad. The pentad is a list of story parameters by which critics are able to comprehend the precise nature of conditions in whatever story is being told. These five terms include the act, agent, agency, scene, and purpose within a narrative (Blakesley 8). As Brummett explains, the author of a text will usually express “a simple combination, or ratio” (193) of these terms rather than employing all of them at once. In Pavlensky’s case, the ratio that dominates his narrative is one of scene-agent, denoting a story in which some agent is influenced by a larger, preceding scene and contextual situation (Blakesley 86-87). The actual story being told in Fixation is one in which the Russian citizen became passive and acquiescent at some point in the past. In Burkean terms, this is the scene of Pavlensky’s piece. It is simply a condition of passivity among Russian citizens. The agent, which we can understand to be the police state bureaucracy, is enabled by these surrounding conditions. A resulting act which the agent carries out is the general suppression of political opposition, erosion of civil liberties, and so forth, which are manifested in various enacted policies, fines, and prison sentences. Even the artist himself ended up being charged with hooliganism after his performance, a crime which could result in up to five years of imprisonment (Ragozin). In addition to the scene, agent, and act, an agency in the story is the Russian government is general. That government’s purpose, according to Pavlensky’s narrative, is one of further concentration of power and the tightening of socio-political control; to borrow an adage, they will continue to have the Russian people by the balls. But his narrative teaches us that there was a choice on the part of those citizens at some point in time to become passive, to be unwilling to fight against the erosion of their freedom. The government is only powerful because it was enabled. What this made way for was its bureaucracy to increase in size exponentially and endlessly.

Indeed, even according to the artist Pavlensky himself, it is ultimately the citizen, and not the government, who should be understood as the one driving the nail down. The rhetorical power in this particular story arrangement is that it is one which is able to resonate with any audience who is familiar with being subject to some kind of overreaching government power. There is a strong parallel that can be drawn between what Pavlensky views as a modern Russian police state and the narrative recognized by Blakesley in the ascendency of Germany’s Adolf Hitler. He observes a scene-agent ratio in this event as well. The scene in Hitler’s case had existed by the end of World War I, a time and place in which “national pride was low and poverty rampant” (91). This scene had a direct influence on creating the conditions in which Hitler, the agent, could ascend to power by boosting a sense of national identity. He did so by “silencing the voices” of political dissent as much as possible (91).

In addition to the aforementioned narrative elements, Pavlensky’s piece is emblematic of the classical genre of tragedy and its related concept of the hero’s fatally-consigned end. The artist describes the symbolism of the nailing as conveying the general “fatalism of contemporary Russian society,” a self-imposed end that is brought about by the “political indifference” of Russian citizens themselves (Walker). The concept of mystery is also embedded in Pavlensky’s Fixation, specifically the mystery of how the country’s police state was ever able to advance as far as it has in the first place. Pavlensky’s statement to the press is one way of “try[ing] to overcome mystery” (Brummett 190) by showing mass acquiescence and inaction to be the culprit. Russians, Pavlensky argues, are failing to remember that they still even possess a “numerical advantage” (Walker). It is evident that the artist is making an argument at the stasis of procedure, compelling his audience “to change the state of things” (Corbett 111) as they exist in Russian society. Pavlensky’s place as a credible communicator may be questioned by many around the world, but it is still the case that he wants to create an impetus for change by first “get[ting] others to understand and accept that a problem exists” (112). His narrative, however, does not go far enough in actually putting forth a proposal regarding how those changes can occur. That may be a matter for his audience to ultimately decide upon.

One of the most compelling reasons for employing the narrative approach to a work like Pavlensky’s is the method’s ability to bring out unique nuances of meaning in artwork. Indeed, when applied to any form of art, as Pamela Regis of Western Maryland College explains, the “chief strength” of narrative criticism is that it has a particular “sensitivity to the role of the author in creating the work and the role of the audience in receiving and understanding it” (94). In Fixation, Pavlensky advances his argument concerning oppressive government by playing on the unignorable emotion of pain. Driving a nail through one’s genitals, of course, was bound to create an entirely new exigency with which observers would be compelled to sympathize, to write the artist off as a fanatical protestor, or simply express disgust. The most profound manner in which Pavlensky accomplishes his rhetorical goal is by generating a worldwide discussion, getting individuals from all walks of life to begin talking about the meaning and implications behind the act. It might even be argued that his actions had a rhetorical influence on law enforcement that day as well. According to one news report, Pavlensky was left undisturbed by police for at least an hour before they offered to take him to a hospital for minor scrotum injuries (Walker). Perhaps the artist had the effect of instilling some amount of caution in police, who might have restrained themselves from lashing out in order to avoid any negative public reaction. As Pavlensky himself admits, he was not just aiming to teach the Russian citizen something. He was at the same time having “a dialogue with the authority” (Galperina). That generated dialogue could very well be considered the rest of Pavlensky’s script, albeit one that is yet unwritten. At its heart, like any narrative, Fixation ends up being a complex story with various characters in roles, a larger scene in which they find themselves, and conflicts which will eventually have to be resolved.